The concept of schizophrenia is dying

The concept of schizophrenia is dying. Harried for decades by psychology, it now appears to have been fatally wounded by psychiatry, the very profession that once sustained it. Its passing will not be mourned.

Today, having a diagnosis of schizophrenia is associated with a life-expectancy reduction of nearly two decades. By some criteria, only one in seven people recover. Despite heralded advances in treatments, staggeringly, the proportion of people who recover hasn't increased over time. Something is profoundly wrong.

Part of the problem turns out to be the concept of schizophrenia itself.

Arguments that schizophrenia is a distinct disease have been "fatally undermined." Just as we now have the concept of autism spectrum disorder, psychosis (typically characterized by distressing hallucinations, delusions, and confused thoughts) is also argued to exist along a continuum and in degrees. Schizophrenia is the severe end of a spectrum or continuum of experiences.

Jim van Os, a professor of psychiatry at Maastricht University, has argued that we cannot shift to this new way of thinking without changing our language. As such, he proposes the term schizophrenia "should be abolished." In its place, he suggests the concept of a psychosis spectrum disorder.

Another problem is that schizophrenia is portrayed as a "hopeless chronic brain disease." As a result, some people given this diagnosis, and some parents, have been told cancer would have been preferable, as it would be easier to cure. Yet this view of schizophrenia is only possible by excluding people who do have positive outcomes. For example, some who recover are effectively told that "it mustn't have been schizophrenia after all."

Schizophrenia, when understood as a discrete, hopeless, and deteriorating brain disease, argues van Os, "does not exist."

Schizophrenia may instead turn out to be many different things. The eminent psychiatrist Sir Robin Murray describes how:

I expect to see the end of the concept of schizophrenia soon … the syndrome is already beginning to breakdown, for example, into those cases caused by copy number [genetic] variations, drug abuse, social adversity, etc. Presumably this process will accelerate, and the term schizophrenia will be confined to history, like "dropsy."

Research is now exploring the different ways people may end up with many of the experiences deemed characteristic of schizophrenia: hallucinations, delusions, disorganized thinking and behavior, apathy and flat emotion.

Indeed, one past error has been to mistake a path for the path or, more commonly, to mistake a back road for a motorway. For example, based on their work on the parasite Toxoplasma gondii, which is transmitted to humans via cats, researchers E. Fuller Torrey and Robert Yolken have argued that "the most important etiological agent [cause of schizophrenia] may turn out to be a contagious cat." It will not. 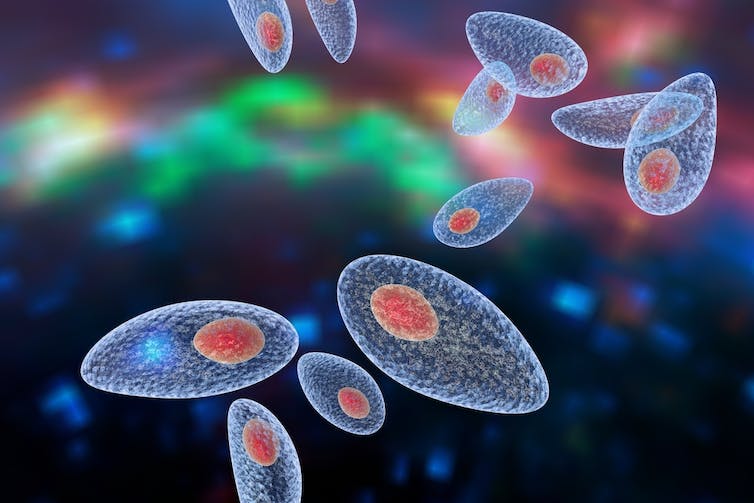 Toxoplasma gondii — likely a cause of ‘schizophrenia', unlikely the most important | (Kateryna Kon/Shutterstock/Courtesy The Conversation)

For example, suffering childhood adversity, using cannabis, and having childhood viral infections of the central nervous system, all increase the odds of someone being diagnosed with a psychotic disorder (such as schizophrenia) by around two to threefold. More nuanced analyses reveal much higher numbers.

Compared with non-cannabis users, the daily use of high-potency, skunk-like cannabis is associated with a fivefold increase in the odds of someone developing psychosis. Compared with someone who has not suffered trauma, those who have suffered five different types of trauma (including sexual and physical abuse) see their odds of developing psychosis increase more than fiftyfold. 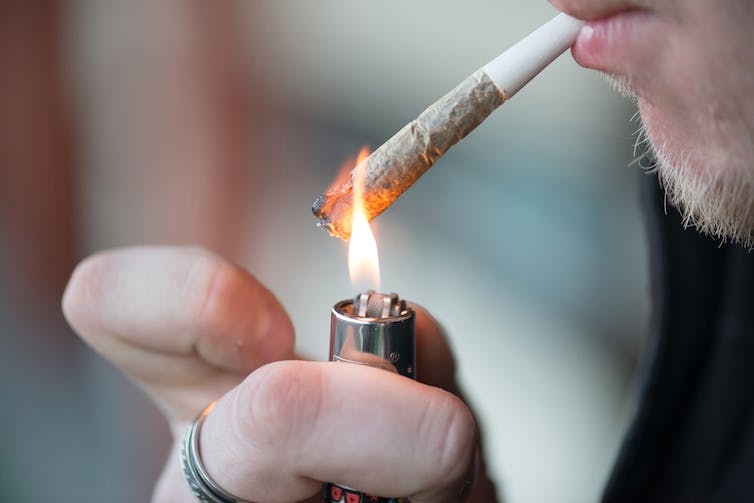 Other routes to "schizophrenia" are also being identified. Around 1 percent of cases appear to stem from the deletion of a small stretch of DNA on chromosome 22, referred to as 22q11.2 deletion syndrome. It is also possible that a low single digit percentage of people with a schizophrenia diagnosis may have their experiences grounded in inflammation of the brain caused by autoimmune disorders, such as anti-NMDA receptor encephalitis, although this remains controversial.

All the factors above could lead to similar experiences, which we in our infancy have put into a bucket called schizophrenia. One person's experiences may result from a brain disorder with a strong genetic basis, potentially driven by an exaggeration of the normal process of pruning connections between brain cells that happens during adolescence. Another person's experiences may be due to a complex post-traumatic reaction. Such internal and external factors could also work in combination.

Many medical conditions, such as diabetes and hypertension, can be reached by multiple routes that nevertheless impact the same biological pathways and respond to the same treatment. Schizophrenia could be like this. Indeed, it has been argued that the many different causes of schizophrenia discussed above may all have a common final effect: increased levels of dopamine.

If so, the debate about breaking schizophrenia down by factors that lead to it would be somewhat academic, as it would not guide treatment. However, there is emerging evidence that different routes to experiences currently deemed indicative of schizophrenia may need different treatments.

Preliminary evidence suggests that people with a history of childhood trauma who are diagnosed with schizophrenia are less likely to be helped by antipsychotic drugs. However, more research into this is needed and, of course, anyone taking antipsychotics should not stop taking them without medical advice. It has also been suggested that if some cases of schizophrenia are actually a form of autoimmune encephalitis, then the most effective treatment could be immunotherapy (such as corticosteroids) and plasma exchange (washing of the blood). 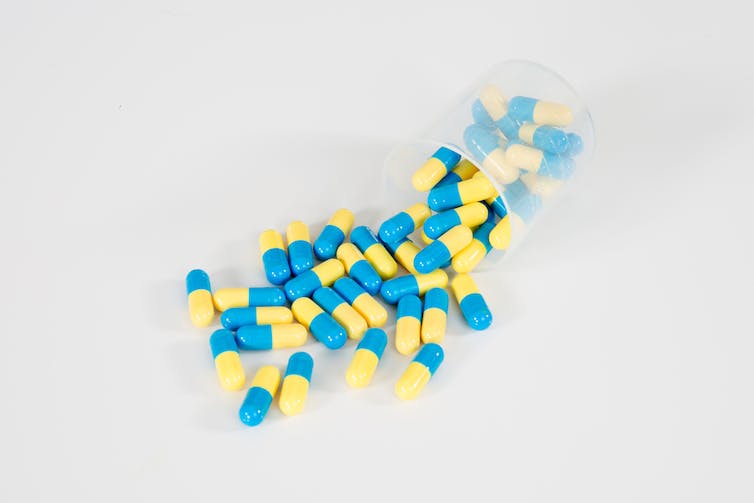 Yet the emerging picture here is unclear. Some new interventions, such as the family-therapy based Open Dialogue approach, show promise for a wide range of people with schizophrenia diagnoses. Both general interventions and specific ones, tailored to someone's personal route to the experiences associated with schizophrenia, may be needed. This makes it critical to test for and ask people about all potentially relevant causes. This includes childhood abuse, which is still not being routinely asked about and identified.

The potential for different treatments to work for different people further explains the schizophrenia wars. The psychiatrist, patient, or family who see dramatic beneficial effects of antipsychotic drugs naturally evangelically advocate for this approach. The psychiatrist, patient, or family who see drugs not working, but alternative approaches appearing to help, laud these. Each group sees the other as denying an approach that they have experienced to work. Such passionate advocacy is to be applauded, up to the point where people are denied an approach that may work for them.

None of this is to say the concept of schizophrenia has no use. Many psychiatrists still see it as a useful clinical syndrome that helps define a group of people with clear health needs. Here it is viewed as defining a biology that is not yet understood but which shares a common and substantial genetic basis across many patients.

Some people who receive a diagnosis of schizophrenia will find it helpful. It can help them access treatment. It can enhance support from family and friends. It can give a name to the problems they have. It can indicate they are experiencing an illness and not a personal failing. Of course, many do not find this diagnosis helpful. We need to retain the benefits and discard the negatives of the term schizophrenia, as we move into a post-schizophrenia era.

What this will look like is unclear. Japan recently renamed schizophrenia as "integration disorder." We have seen the idea of a new "psychosis spectrum disorder." However, historically, the classification of diseases in psychiatry has been argued to be the outcome of a struggle in which "the most famous and articulate professor won." The future must be based on evidence and a conversation which includes the perspectives of people who suffer — and cope well with — these experiences.

Whatever emerges from the ashes of schizophrenia, it must provide better ways to help those struggling with very real experiences.

Simon McCarthy-Jones is an Associate Professor in Clinical Psychology and Neuropsychology at Trinity College Dublin.

'Precision nutrition': Are hyper-individualized diets the future of eating?