Joe Biden wins Ohio primary, and so does mail-in voting

Ohio held is primary election on Tuesday, mostly voting by mail for the first time because the state is still in lockdown to halt the coronavirus pandemic. Former Vice President Joe Biden won the Democratic primary — he is the only candidate still running — and Rep. Joyce Beatty (D-Ohio) fended off a primary challenge from Morgan Harper, endorsed by the progressive group Justice Democrats. In Maryland, former NAACP head Kweisi Mfume, a Democrat, won a special election to replace the late Rep. Elijah Cummings (D), beating Republican Kimberly Klacik. Mfume had held the seat before Cummings.

Ohio's election had originally been scheduled for March 17 but Gov. Mike DeWine (R) postponed it, citing a "health emergency." Ohio Secretary of State Frank LaRose said about 2 million people had requested mail-in ballots and 1.5 million had returned them by Saturday; 3.2 million people voted in Ohio's 2016 presidential primary. Turnout, LaRose said, "was better than okay. It was great." Ohio's GOP-led legislature had approved the mail-in election but rejected a proposal to automatically mail ballots directly to voters, as Oregon, Colorado, Hawaii, Utah, and Washington State do.

Other states are exploring vote-by-mail with the assumption that the coronavirus will still be an impediment to voting in November, and Ohio's "moving to a mail-in primary on the fly was watched around the country," The Associated Press reports. Support for voting by mail has grown, polls show, though there's a partisan split likely widened by President Trump's opposition to the idea. An AP/NORC poll released Tuesday found that 39 percent of Americans would like to see all-mail elections, up from 19 percent in 2008, but 48 percent support all-mail voting if COVID-19 is still active in November. And 60 percent favor absentee ballots for any voter who wants one if the pandemic is still happening. 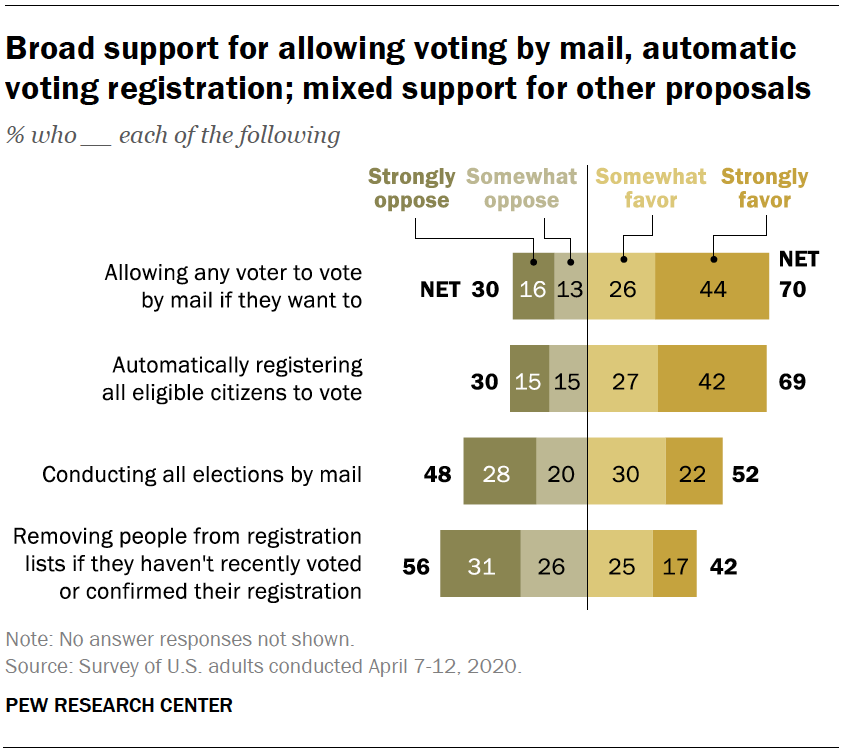 Former Vice President Joe Biden won the Wyoming Democratic presidential caucus with 72 percent of the vote, the state's Democratic Party announced Sunday. Sen. Bernie Sanders (I-Vt.), who last week suspended his campaign and endorsed Biden, received nearly 28 percent of the vote, The Washington Post reports. Wyoming was the latest state to shift to a nominating contest with mail-in voting only due to the coronavirus pandemic. Biden, now the presumptive Democratic nominee, will get 10 of the state's pledged delegates. Sanders gets four. Sanders beat Hillary Clinton in Wyoming's 2016 in-person contest by about 12 percentage points. Harold Maass

Joe Biden wins his 3rd primary of the night in Arizona

Biden swept all of Tuesday's presidential primaries, picking up wins in Illinois and Florida as well.

With just two percent of precincts in Arizona reporting, Biden has 42.8 percent of the vote, followed by Sen. Bernie Sanders (I-Vt.) with 30.1 percent. Sanders is outperforming Biden in three counties: Coconino, Yuma, and Apache. Catherine Garcia

In 2016, Sanders narrowly lost the Illinois primary to Hillary Clinton; she received 50.6 percent of the vote, just ahead of Sanders' 48.6 percent. Catherine Garcia

With 76 percent of precincts reporting, Biden has 61.4 percent of the vote, well ahead of Sen. Bernie Sanders (I-Vt.), who has 22.6 percent. Biden is winning all of the counties that have so far reported their results. Going into Tuesday's primaries, Biden was the clear favorite in several polls in Florida. Catherine Garcia

Former Vice President Joe Biden is the projected winner of the Idaho Democratic primary, the latest in a string of victories.

Biden won in Michigan, Mississippi, and Missouri on Tuesday, with the races in Washington too close to call and North Dakota too early to call. In Idaho, 90 percent of precincts have reported their results, and Biden has 48.3 percent of the vote compared to Sen. Bernie Sanders (I-Vt.) with 42.6 percent. Sanders won Idaho in the 2016 Democratic presidential primary. Catherine Garcia

It's been another successful Tuesday primary night for former Vice President Joe Biden, who solidified his position as the frontrunner for the Democratic presidential nominee after wins in the highly coveted Michigan primary, as well as those in Missouri, and Mississippi. But in a speech to his supporters after the results rolled in, Biden extended a peace offering to his chief rival for the nomination, Sen. Bernie Sanders (I-Vt.), and his supporters.

There were no barbs fired at his top competitor. Instead, Biden praised the "tireless energy and their passion," of Sanders and his supporters, adding that both campaigns "share a common goal of defeating" President Trump, and that they'll do it "together."

Joe Biden thanks Bernie Sanders and his supporters "for their tireless energy and their passion."

"We share a common goal, and together, we'll defeat Donald Trump" https://t.co/gbUWwhylXt pic.twitter.com/e3b9iWgeHe

Don't expect Biden, should he hold on to secure the nomination, to pick Sanders as his running mate, but the comments could signal he's prepared to try to mend fences between Sanders and the Democratic Party in the hopes of keeping his base in the fold when the general election rolls around in November. Tim O'Donnell

Sen. Bernie Sanders (I-Vt.) won a close primary contest over Hillary Clinton in Michigan in 2016. Four years later, he's projected to lose to Joe Biden in the same state by double digits, which has a lot of analysts now arguing his previous victory might have been more about his opponent than him.

Biden's ability to swipe Michigan from Sanders likely hinges on a few factors — exit polls show he received major support from voters over the age of 45 (who turned out at higher rates than younger voters), as well as the state's African American voters. But he also edged Sanders among white men. The totals were close, with Biden ahead by just 3 percentage points, but it's a major turnaround considering Sanders defeated Clinton by 25 points among the demographic four years ago.

That appears to give some juice to the narrative that Sanders' victory in 2016 was "largely an anti-Hillary vote," rather than a pro-Sanders one.

This is not complicated. Bernie Sanders didn't win Michigan in 2016; Hillary Clinton lost it.

Despite the Michigan loss, Clinton did go on to secure the nomination, but she ultimately lost to President Trump in the general election, and Michigan played a crucial role in that outcome. But there's some speculation that Biden turning the tide against Sanders could be a preview for what's to come in November, too. Tim O'Donnell

But it doesn't hate Joe Biden.