Several polls have shown that former Vice President Joe Biden, the presumptive Democratic presidential nominee, is building a lead among suburban voters across the United States. While it may seem unlikely that will be the case in Texas, a new Quinnipiac University poll does provide some evidence that President Trump's suburban support is dwindling there.

The poll, released Wednesday, still shows Trump leading his likely challenger among white voters with a college degree, 49 percent to 42. But The Cook Political Report's Dave Wasserman noted that Trump's support among the same demographic was much higher in 2016 when he ran against Hillary Clinton, suggesting a "massive suburban defection" is on the horizon for the incumbent.

This is a massive suburban defection.

Overall, the poll is another indicator that Texas could be a close contest in November.

Back in 2016, Reuters/Ipsos polling found that, in the months leading up to the general election, President Trump and his Democratic competitor Hillary Clinton garnered an equal amount of support among third party or undecided voters. Eventually, a majority of those voters backed Trump when they went to the booth. But a new Reuters/Ipsos poll suggests that he'll have a tough time repeating that against former Vice President Joe Biden in 2020.

A majority of undecided or third party voters — 61 percent — responded that they would support the presumptive Democratic nominee if they had to choose. And 70 percent of those said they disapprove of Trump's performance in the Oval Office so far, and they don't have much hope that he can turn things around.

Based on the numbers, that pessimism seems tied to the coronavirus pandemic. Among the undecided group, about 80 percent are concerned about the spread of the virus, and a plurality of respondents said electing a candidate with a "robust plan" to help the U.S. recover from the pandemic was the driving factor in deciding their vote.

Back at the end of March, when the coronavirus was first surging in the United States, polls showed Americans felt similarly about both likely presidential candidates' abilities to handle the pandemic. Three months later, that's changed, a new survey released from The Washington Post and ABC News finds.

The poll, released Sunday, shows the presumptive Democratic nominee, former Vice President Joe Biden, holding a 20-point advantage over President Trump when it comes to which candidate voters trust more to deal with the pandemic. In March, the two were all but even, with Trump actually holding onto a slight advantage. The president is still seen as the better bet to manage the economy effectively, although his margin is shrinking there, as well.

NEW: Big swing in who Americans trust to handle the coronavirus:

Overall, Biden has a 15-point lead over Trump among registered voters, up from a 10-point lead in May and a 2-point advantage in March. The Post notes that Trump's decline in support is concentrated in states that are experiencing larger coronavirus outbreaks at the moment, including Florida, Texas, Arizona, and Georgia.

The Post/ABC News poll was conducted between July 12-15. A random national sample of 1,006 adults were surveyed over the phone. The margin of error is 3.5 percentage points. Read the full results here. Tim O'Donnell

Former Vice President Joe Biden, the presumptive Democratic nominee, is reportedly taking a cautious approach to states like Texas, but two new polls released Sunday will seemingly bolster the hopes of his supporters who want him to go all in.

A survey conducted by The Dallas Morning News and the University of Texas at Tyler found Biden to have a five-point lead over President Trump, with UT-Tyler political scientist Kenneth Bryant Jr. describing the jump as a result of Trump losing with independents and "weak partisans."

A CBS News poll conducted by YouGov indicated the loss of support likely has to do with how voters feel about Trump's coronavirus response. The CBS Poll isn't quite so high on Biden's chances in Texas — Trump holds a one-point advantage over his challenger — but it does show the former vice president is in the race there, as well as two other key Sun Belt states, Florida and Arizona.

All three states are struggling with coronavirus surges, and voters aren't happy about it. The results show 69 percent of Arizonans, 65 percent of Floridians, and 62 percent of Texans think efforts to contain the virus are going poorly. About six in 10 voters in all three states believe their economies opened too early. In Florida 68 percent think that was because of pressure from the Trump administration. The number is a little lower in Texas at 61 percent, but 70 percent of Arizonans think their government was under pressure from the White House.

Two polls released Tuesday show former Vice President Joe Biden with double-digit leads over President Trump, but both surveys also suggest this election is shaping up to be a referendum on Trump where a majority of voters see Biden as at least an acceptable alternative.

In a USA Today/Suffolk poll, Biden has opened up a 12-point lead, 53 percent to 41 percent — though when given the choice of a generic third-party candidate, Biden's lead shrinks to 9 percentage points, 46 percent to 37 percent. Pew Research Center found Biden with a 10-point lead, 54 percent to 44 percent — close to the 9.6-point lead Biden has in polling averages from both RealClearPolitics and FiveThirtyEight.

In both polls, a dissatisfied electorate is mostly voting either for or against Trump, whose approval rating has dropped to 40 percent (USA Today) or 39 percent (Pew). In the USA Today/Suffolk poll, a quarter of all voters said the most important reason they are voting for their candidate was to oust Trump; the next most popular reason, at 9 percent, was the economy and jobs. Half of all Trump voters said they are "very excited" about their candidate, versus 27 percent of Biden voters. Pew found that 76 percent of Trump voters are mostly voting for Trump and 67 percent of Biden voters are primarily voting against Trump.

For a snapshot of how registered voters view the two candidates, Pew asked what kind of president each would make. 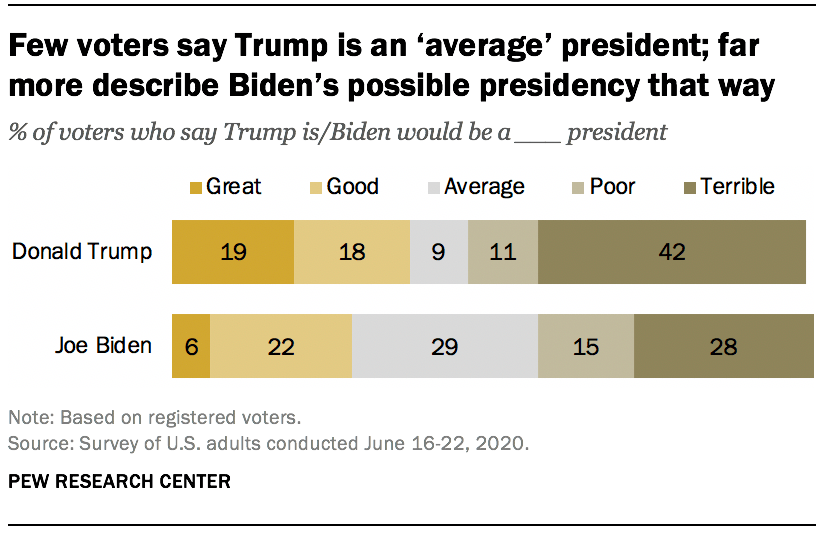 On issues and character traits, voters in both polls favored Biden on almost every metric. Trump held a 2-point lead on the economy in the USA Today poll but trailed Biden on six other issues, including a 24-point deficit on handing the COVID-19 pandemic and 29-point chasm on race relations. "Two-thirds of those surveyed, 67 percent, say Biden, a former vice president, has 'the right experience to be president,'" USA Today notes. "Thirty-seven percent say that of Trump, who has been president for 3 1/2 years."

Sen. Joni Ernst (R-Iowa) was not on the list of vulnerable incumbents all that long ago, but a Des Moines Register poll released over the weekend has her trailing new Democratic opponent Theresa Greenfield by 3 percentage points, 46 percent to 43 percent, among likely voters. Ernst has never fallen behind a Democratic opponent since her winning 2014 campaign, said J. Ann Selzer, the highly regarded pollster who conducted the survey. "Symbolically, that's certainly meaningful, even if Theresa Greenfield's lead is not commanding."

Ernst's job approval rating began slipping earlier this year, the Register notes, though it has risen to 49 percent from 47 percent in March. There is the predictable split of rural and white evangelical voters favoring Ernst while urban and non-religious voters back Greenfield, but also independents currently back Greenfield 42 percent to 38 percent. There is a wide gender split, but interestingly, it increases among voters with less formal education: White men without a college degree support Ernst, 59 percent to 30 percent, while white women without a college degree pick Greenfield 60 percent to 29 percent.

A separate poll, conducted by Civiqs for Daily Kos, also found Greenfield leading by 3 points, 48 percent to 45 percent, even as President Trump and his Democratic opponent Joe Biden are tied at 46 percent each. Trump won Iowa by 9 points in 2016, but Democrats flipped two of Iowa's four House seats in the 2018 midterms. Democrats would need to flip a net four GOP seats to take control of the Senate.