President Trump's defense team will wage its second day of arguments in his Senate impeachment trial on Monday, explaining to the Republican-controlled chamber why it should acquit Trump on both impeachment charges and not call witnesses later this week. A Fox News poll released Sunday found that voters think the Senate already has enough evidence to render its verdict — 48 percent to 44 percent who say senators should subpoena witnesses. But by a margin of 6 percentage points, they think the evidence points to guilt and removal from office.

New Fox News poll: by a margin of 50% to 44%, Americans want Trump convicted and removed from office. pic.twitter.com/G2IStl7TlC

Two polls last week found that 51 percent of Americans want the Senate to convict and oust Trump, whose approval rating in the Fox News poll is 45 percent, 54 percent disapproval. By comparison, Fox News notes, "around the time former President Bill Clinton's impeachment trial began in January 1999, some 38 percent said the Senate should remove him from office, and 65 percent approved of the job he was doing as president."

Luckily for Trump, the party with a Senate majority is taking his side — 84 percent of Republicans told the Fox News pollsters that Trump shouldn't be convicted and removed, versus 81 percent of Democrats who said he should be; independents wanted Trump removed by a 19-point margin, 53 percent to 34 percent.

A narrow 51 percent majority of U.S. adults say the Senate should remove President Trump from office at the end of his impeachment trial, a Pew Research Center poll released Wednesday found, while 46 percent said the Senate should keep him in office. Those numbers are nearly identical to a CNN poll released Monday. An Associated Press-NORC poll Thursday found a 45 percent plurality of Americans who want the Senate to convict and oust Trump, versus 40 percent who favor acquittal and 14 percent who said they didn't know enough to have an opinion. 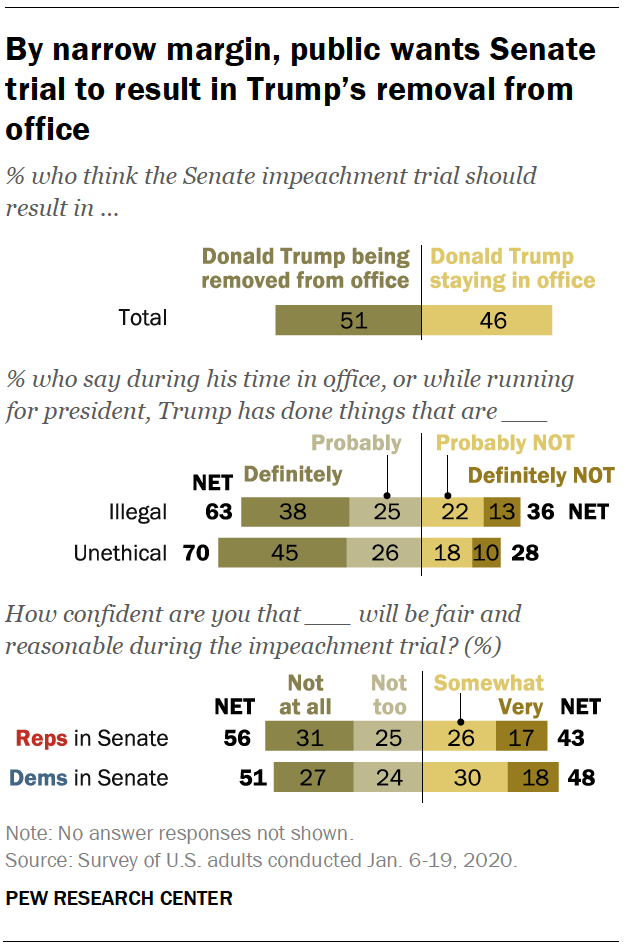 Pew also found that 63 percent of Americans said Trump has definitely (38 percent) or probably (25 percent) done something illegal since launching his presidential campaign, including 91 percent of Democrats and 32 percent of Republicans.

Trump's job approval rating is 40 percent in the Pew survey and 41 percent in the AP-NORC poll, roughly where it has been for months. Pew's American Trends Panel (ATP) surveyed 12,638 people Jan. 6-19, and the full sample has a margin of sampling error of ±1.3 percentage points. AP-NORC polled 1,353 adults Jan. 16-21, and the margin of sampling error for all respondents is ±3.6 percentage points. Peter Weber

Half of American voters support impeaching President Trump and removing him from office, while 41 percent oppose impeachment, according to a Fox News poll released Sunday. That's a tiny uptick from late October, when Fox News' pollsters found support for impeaching and removing Trump at 49 percent. The steadiness of those numbers is "fairly remarkable considering all that happened between those two polls," Fox News says. Trump's approval rating, meanwhile, has risen 2 percentage points to 45 percent, with 53 percent disapproving of his job performance.

There is a clear partisan split in the impeachment polling — 85 percent of democrats and a new high of 45 percent of independents favor impeaching and removing Trump, while 84 percent of Republicans disapprove. Most voters said Trump has done potentially impeachable things, the poll found, including 53 perfect who believed he abused the power of his office. A 48 percent plurality said he obstructed Congress, and 47 percent agreed Trump held up military aid to Ukraine to pressure its president to investigate his political rivals.

By a 16-point margin, voters said Republicans are more interested in protecting Trump than actually believe he did nothing impeachable; by 6 points, they said Democrats believe he committed an impeachable offense rather than want to hurt him politically. But nationally, impeachment is essentially a wash, with voters slightly more willing to vote for incumbents who vote to impeach Trump.

The American people think that it's the Republicans who are playing politics with impeachment, much more than they think the Democrats are doing so, by a good margin. Via latest FOX News poll: pic.twitter.com/SECFDtWuGp

The poll was conducted Dec. 8-11 by Beacon Research (D) and Shaw & Co. (R) among 1,000 registered voters nationwide. It has a margin of sampling error of ±3 percentage points. In FiveThirtyEight's impeachment polling aggregation, 48 percent support impeaching Trump and 45.9 percent oppose it. Peter Weber

At this moment in time, as House Democrats prepare to make their impeachment case public and President Trump is "ravenously consuming news about the subject — primarily through a friendly lens," as Politico reports, there seems to be an unusual consensus in the polls. Two polls released Sunday and one on Friday all found that 49 percent of voters want Trump both impeached and removed from office.

There are wide partisan splits in the polling and an apparent hardening of positions — in the Fox News poll, 57 percent of impeachment opponents, or about a quarter of the entire sample, said no new evidence could make them support impeachment. In the same poll, 52 percent said the impeachment inquiry is a legitimate, important investigation while 39 percent called it "bogus." Trump agreed with the 39 percent. "You're reading the wrong polls," he told CNN's Jeremy Diamond on Sunday. The "real polls" show "people don't want anything to do with impeachment."

Here's the official transcript of Trump's exchange with CNN's @JDiamond1 about polling on impeachment. pic.twitter.com/mfOv1y5Ekw

Another day, another poll showing rising support for the House impeachment inquiry of President Trump.

There is a wide partisan split in the results, but 58 percent of independents support the House impeachment inquiry and 49 percent want him booted from office, versus 41 percent who don't. As support for impeaching Trump rose, his job approval number dropped to 38 percent, with disapproval at 58 percent, tied for the lowest net approval of his presidency. In last week's poll, Trump's approval rating was 41 percent to 54 percent disapproval. A brutal 66 percent of women disapprove of Trump's job performance.

In FiveThirtyEight's aggregation of impeachment polls, support for the impeachment inquiry is now at 51.1 percent, with 42.7 percent not supportive, while 48.7 percent back impeaching Trump and/or removing him from office versus 43.4 percent who don't.

A Fox News poll released Wednesday recorded a 51 percent majority of voters in favor of both impeaching President Trump and removing him from office, with another 4 percent favoring impeachment but not removal and 40 percent opposed to impeachment. Support for impeachment was up 9 percentage points overall since a Fox News poll in July, including an 11 point rise among Democrats, a 5 point bump among Republicans, and a 3 point gain among independents.

The poll was conducted Oct. 6-8 by Beacon Research (D) and Shaw & Co. (R), who surveyed 1,003 registered voters nationwide via landline and cellphone. The margin of sampling error is ±3 percentage points for all voters. Read more results at Fox News. Peter Weber

A 58 percent majority of Americans say House Democrats were right to begin an impeachment inquiry of President Trump, and a 49 percent plurality say the House should vote to remove him from office, according to a Washington Post-Schar School poll released Tuesday morning. Support for impeachment has jumped significantly across the board since the White House released a transcript of Trump's July 25 call with Ukrainian President Volodymyr Zelensky in late September.

The Post and George Mason University's Schar School of Policy and Government conducted the poll by phone Oct. 1-6 among 1,007 U.S. adults, and the margin or sampling error for the entire survey is ±3.5 percentage points. The results were nearly identical for U.S. adults and registered voters. On FiveThirtyEight's aggregate of impeachment polling, which did not include this new poll, 46.5 percent support the impeachment inquiry and 44.7 percent do not. Peter Weber

Republicans seem to think what Trump did was wrong. They just don't believe he did it.

The impeachment polls don't seem to be going President Trump's way, especially among key groups like women, college-educated white voters, and independents, Politico reports. A USA Today/Ipsos poll conducted Tuesday and Wednesday and released Thursday, for example, shows Americans support the House voting to impeach Trump by a 45 percent to 38 percent margin, and they want the Senate to convict and remove him from office, 44 percent to 35 percent. FiveThirtyEight launched an impeachment poll tracker that, as of Thursday, has support for impeachment up 46.7 percent to 45.1 percent.

A Monmouth University poll released Tuesday found that only 40 percent of Republicans believe that Trump mentioned the possibility of Ukraine investigating Biden in his July 25 phone call Ukrainian President Volodymyr Zelensky, and 29 percent say Trump probably never mentioned it. Trump has publicly acknowledged asking Zelensky to investigate Biden, and according to the incomplete phone transcript released by the White House, Trump told him: "There's a lot of talk about Biden's son, that Biden stopped the prosecution, and a lot of people want to find out about that, so whatever you can do with the attorney general would be great. Biden went around bragging that he stopped the prosecution so if you can look into it ... It sounds horrible to me."

"At the very least, it is clear from the readout that Trump discussed investigating Biden during the call," said Monmouth's Patrick Murray. That so many Republicans don't seem to know that, he told Politico, "told us how powerful partisan filters can be for just interpreting obvious facts."

The USA Today/Ipsos poll was conducted online among 1,006 adults and has a credibility interval of ±3.5 percentage points. Monmouth conducted its poll Sept. 23-29 among 1,161 adults, and its margin of error is ±2.9 points for the entire sample. Peter Weber