Polling consistently shows the economy to be President Trump's strongest issue, and he defended his record in an ABC News town hall in Pennsylvania on Tuesday night.

Many economists look at the economy since COVID-19 hit and see a K-shaped recovery — where "the people at the top who have a lot of stocks are doing pretty well" while everyone else is sliding downward, as moderator George Stephanopoulos put it. Trump is more bullish. "It looks like it's going to be a super V," he told an uncommitted voter who had asked him about acting more "presidential." "We're going to have a great economy next year."

"George, stocks are owned by everybody" -- pressed on the fact that only half the jobs lost during the pandemic have come back, Trump quickly pivots to hyping the Dow pic.twitter.com/MagPCMBHqp

The stock markets have recovered and even reached new highs, driven by tech companies, but half the 22.2 million workers who lost their jobs in the pandemic are still out of work. When Stephanopoulos pointed that out, Trump said: "George, stocks are owned by everybody. You know, they talk about the stock market is so good, that's 401(k)s. ... You have people that aren't wealthy but have done well because of the stock market."

About 55 percent of U.S. adults own stocks, either in individual companies or mutual or index funds, Gallup reported in June. And the richest 1 percent of Americans own more than half the stock owned by U.S. households, the Financial Times found. New York's Jonathan Chait gave Trump the benefit of the doubt.

Trump answers k-shaped recovery question by saying everybody owns stocks. I wonder if he believes that -- my guess is, as a Fox News/Fox Business channel viewer who talks exclusively to rich guys, he does.

TRUMP: If you look under Obama and Biden, the income inequality was phenomenal

STEPHANOPOULOS:: It's getting worse now

TRUMP: Well, we're talking about a plague coming in pic.twitter.com/B94G0CoR77

Inequality was still growing in the U.S., Pew noted in pre-pandemic February. 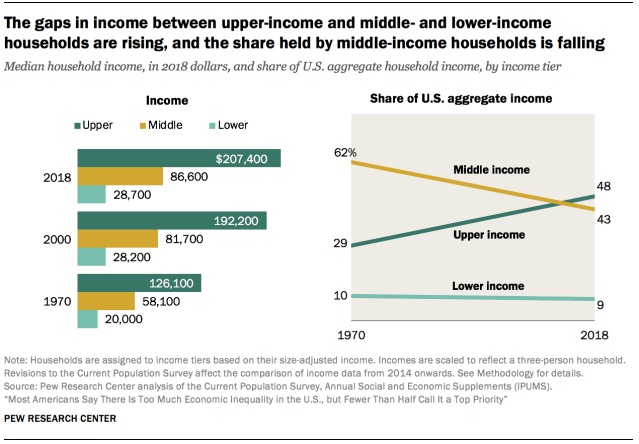 In fact, the super-wealthy have done very well during the pandemic — U.S. billionaires increased their collective wealth by $685 billion as of early August, according to one analysis. Watch Mother Jones try to put that in perspective. Peter Weber

President Trump fielded questions from uncommitted Pennsylvania voters Tuesday night during a 90-minute town hall hosted by ABC News. He didn't nail all the facts, and some of the voters asked challenging questions about Trump's coronavirus response, race, and the economy, but Trump was able to respond to the proffered concerns on prime-time network TV in one of the key 2020 battleground states.

How did Trump do? It didn't appear to be viewed as a big success at Fox News, where host Laura Ingraham suggested "the DNC may as well have put the whole thing on" over a chyron reading: "ABC Spring Ambush on Pres. Trump at Town Hall"

Ingraham played parts of some of Trump's interactions with the uncommitted voters, but here's how he responded in full to a question about face masks.

The President attempts to blame Joe Biden for not implementing a national mask mandate pic.twitter.com/nq9J6cVFoR

You can decide if the question was fair or the response balanced. Peter Weber

President Trump told author Bob Woodward earlier this year that the coronavirus was "more deadly than even your strenuous flu," but he wanted to "always play it down. I still like playing it down, because I don't want to create a panic." On Tuesday, he told undecided voters during an ABC News town hall that he "didn't downplay it. I actually, in many ways, I up-played it, in terms of action. My action was very strong."

The town hall, called "The President and the People," was held in Philadelphia and moderated by George Stephanopoulos. Trump fielded questions from audience members, including one who asked why he would "downplay a pandemic that is known to disproportionately harm low-income families and minority communities."

Trump denied downplaying the virus and said one way he "up-played it" was by putting in place partial travel bans against China and parts of Europe in February and March. Stephanopoulos asked Trump to elaborate on his comments to Woodward, but Trump remained focused on the bans. "Whether you call it 'talent' or 'luck,' it was very important," he said. "So we saved a lot of lives when we did that."

Another voter asked Trump about his Make America Great Again campaign slogan, saying this "pushes us back to a time in which we cannot identify with such 'greatness.' You've said everything else about choking and everything else, but you have yet to address and acknowledge that it has been a race problem in America."

Trump responded, "Well, I hope there's not a race problem. I can tell you there's none with me because I have great respect for all races, for everybody. This country is great because of it." He added that he has been "bringing people together," and before the pandemic he ushered in "the best unemployment numbers they've ever had in the Black community, by far." Catherine Garcia

"They aimed at Trump and they took Biden down," Trump said Thursday evening during a Fox News Town Hall in Biden's home town of Scranton, Pennsylvania. During the impeachment, Trump was accused of withholding military aid to Ukraine in order to pressure Ukrainian President Volodymyr Zelensky into announcing an investigation into Biden, then considered the Democratic frontrunner. After stumbles in early voting states, Biden had major wins on Super Tuesday and is now ahead in delegates.

Trump also took a swipe at Biden's cognitive function, saying that when he mistakenly said it was Thursday on Tuesday and stated he was running for U.S. Senate instead of president, it showed "there's something going on there." Catherine Garcia